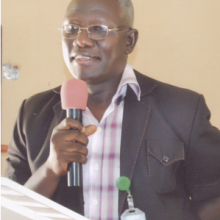 Curriculum Vitae of the Unit Head:

The Head of the Unit is currently Mr. Shaibu Attah Onoja, a Deputy Registrar who rose through the rank of Administrative Assistant of this University from 1 Jan. 1996 till date.  Mr. Onoja had his primary school education at Dzamata L.S.M.B. Primary School, Lafiagi, Kwara State.  He had his secondary education at Government Secondary School, Akpanya, Kogi State-1979-1984.  He later proceeded to the University of Jos where he obtained B.A (Hon) in Linguistics in 1991, and later acquired the Post Graduate Diploma certificate in Public Administration (PGD) from the University of Calabar in the year 2000 and M.Sc. in Industrial Sociology/Personnel Management from Imo  State University, Owerri 2004.

Mr. Onoja cherish the prospect of being part of a dedicated and pro-active team where he can make significant contributions to achieve the institutional goals, vision, mission and effective and efficient service delivery. His vision is to be part of an efficient, effective, disciplined and productive team with robust administrative structure that will pro-actively drive service delivery.

i)        Assisted in the preparation and documentation of Council papers.

ii)       Supervision of postages in the Registrar’s Office.

materials/equipment in the Registrar’s Office.

vi)      Assisted in the custody and control of Departmental Stationeries.

v)       Any other duties that were from time to time assigned to me by Registrar.

i)        Supervised and controlled affairs in the College under the general direction and supervision of the Dean.

ii)       Supervised junior staff, materials and equipment in the College.

v)       Secretary, College Board and Allied Committees as may be set up by the College.

vi)      Assisted in effective application of all University’s Academic  Regulations in the College.

vii      Registered students in the College.

viii)    Liaised between the Registry and the College.

i)        Arranged accommodation for Council Members and important  visitors of the University in Hotels and Guest Houses.

ii)       Ensured that Council members and dignitaries visiting the University from distant places are not stranded at the airports or motor parks on dismemberment.

iii)      Assisted in ensuring that Council members/University guests are well catered for.

v)       Liaised with appropriate security/protocol agencies and ensured that important visitors to the University, such as the Head of State,Governors, Ministers, etc were well received.

vi)      Actively participated and ensured that appropriate protocols were observed during University ceremonies.

vii)     Liaised with appropriate officers and ensured that proper preparations were made for Council members’ welfare during Council/Council Committee meetings.

ii)       Assisted in promoting the corporate image of the University and

iv)      Monitoring the press and assisted in assessment of reports on the University in the media, proffering advice and reacting to such  issues when necessary.

viii)    Assisted in publicizing the University activities through issuance of press releases.

ix)      Served as Secretary to many ad hoc Committees.

x)       Carried out any other duties assigned to me by the Vice-Chancellor,

Registrar or the Head of Unit.

i)        Offered general assistance to the Head of Unit.

iv)      Reception, collation and compilation of information for staff  appraisal.

vi)      Processed pensions and gratuities for retired staff of the University.

viii)    Carried out any other duties assigned to me by the Registrar or the Head of Unit.

i)        Assisted in general administration of the Unit.

ii)       Assisted in scheduling and conveying notices of Council/Council

v)       Assisted in the arrangement for the welfare of Council members in  liaison with the Bursary Department, Protocol, Catering and Transport Units.

viii)    Any other duties assigned to me by the Registrar/the Head of Unit.

ii)       Effectively managed the day to day operations of the Liaison Office.

Same as in above

i)        Supervision and control of affairs in the College under the general  direction and supervision of the Dean.

ii)       Custody of materials and equipment in the College.

iii)      Custody of records of students and staff of the College.

iv)      Secretary, College Board and allied Committees as may be set up by

viii)    Liaison between the Registry and the College.

a)       Deputy Registrar in the Registrar’s Office; Supervised:

vii)     Induction Seminar for admittance as “Full Member” of the Institute of Professional Managers and Administrators of Nigeria (IPMA) (22nd June, 2011)

I         MEMBERSHIP OF PROFESSIONAL BODIES/ORGANIZATIONS:

i)        University Sport Merit Award for good Performance at the Nigerian University Game Association (NUGA) ‘UNILAG’ ‘98’ as the  Badminton and Table Tennis Coach.

vi)      Letter of Commendation by the University Governing Council (2011)