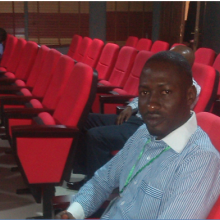 To improve more creative ways of maintaining excellence productivity and cutting edge service in my chosen career. To work with existing staff and facilities, contributing the best of my ability and talent, so as to improve the objective of the organization.

Maintenance of systems and network,Running of daily and monthly transactions.

-keeping record of landing and packing of flights

Best Staff of the year 2016 (Senior Category)     Directorate of ICT