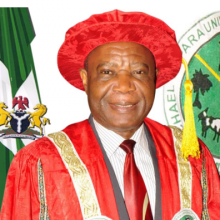 Udo Herbert has the academic qualifications of Bachelor of Agriculture with honours in Animal Science from the University of Nigeria, Nsukka as well as the Masters and Doctorate degrees of the University of Ibadan, Ibadan. In addition, he possesses the professional Certificate of the International Course for development-oriented Research in Agriculture (ICRA), Wageningen, The Netherlands.

By August 2018, Professor Herbert has garnered 26 years of teaching and research in Animal Physiology, starting from the University of Ibadan where he served as a Part-Time Lecturer to Federal University of Technology, Owerri. Since 2005, he has been a Professor at the Department of Animal Breeding and Physiology, Michael Okpara University of Agriculture, Umudike. His main research focus has been on the behaviour and reproduction in different male mammalian farm species. His publication on the construction and evaluation of an artificial vagina for collecting rabbit semen in 1995 was novel at the time and opened up more avenues for research in rabbit bucks in Nigeria. Professor Herbert has also carried out extensive studies on the use of local plant materials to enhance libido and spermatogenesis in rabbits. His current research interest is on gamete manipulation and germplasm conservation in indigenous farm species.

Professionally, Professor Herbert is a Registered Animal Scientist and Member of the Council of the Nigerian Institute of Animal Science (NIAS). He is currently the Chairman of the Animal Physiology and Bioclimatology as well as the Education Committees of NIAS. He is a Fellow of the Nigerian Society for Animal Production (FNSAP) as well as Fellow of the College of Animal Scientists in Nigeria (FCASN). Professor Herbert was President of the Nigerian Society for Animal Production from 2008 to 2012. In that capacity he was a Member of the National Livestock Development Committee as well as Member of the General Assembly of the World Association of Animal Production (WAAP) based in Rome, Italy. Between 2000 and 2016, Professor Herbert served as Member of the Standing Committee of International Congress on Animal Reproduction (ICAR) based in Sydney, Australia and has attended 4 quadrennial congresses of the scientific body in various centres around the world. These exposures reinforced his interest in animal reproduction.

Currently, Professor Herbert is a Member of National Advisory Committee on Animal Genetic Resources in Nigeria.