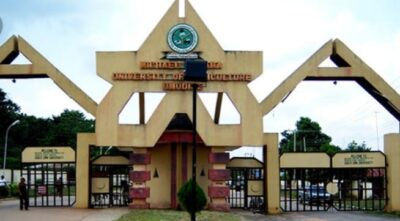 Winners of the Michael Okpara University of Agriculture, Umudike Students’ Union Government (SUG) election, held on Friday, have emerged. In the SUG election which is the first ever to adopt the electronic voting system in the history of the University, Chukwuma Ogochukwu from the College of Education (COED) won the seat of the President with a total of 3,771 votes, while Juliet Ogechi from the College of Natural Science (COLNAS) emerged Vice President after polling 2,799 votes.

In other results also declared by the Dean of Student Affairs, Prof. Marc Nwosu Ogbuagu, Prince George polled a total of 2,102 votes to become the new Secretary General, while Nwachukwu Joy got 3,011 votes to win the seat of Assistant Secretary General.

The post of Director of Socials was won by Okoro Henry, who scored 3,165 votes, while Chibueze Godson became the Director of Finance with 3,047 votes.

Other candidates declared winners in the keenly contested elections were Iwuji Esther, who won the seat of the Director of Treasury with 3,343 votes, while Emmanuel Chijioke will occupy the Office of the SUG Public Relations Officer after securing 2,433 votes. Chisom Bernard clinched 3,158 votes to emerge Director of Transport. Additionally, 4,245 votes and 3,680 votes were enough for Ogbonna Onyedikachi and Nnaemeka Chukwuemeka to become the new Director of Sports and Director of Welfare, respectively.

Online voting commenced after students were accredited at the three-winged hall of the institution. Accredited students who had difficulties accessing the Internet were directed by the Dean of Student Affairs to the University e-test center where they cast their votes.

The University Security, men of the Nigeria Police, Department of State Services (DSS), Man O’ War and thunderbolt were on ground during and after the elections, to ensure a hitch-free exercise.

An election to fill positions in the Student Representative Council (SRC) were held same day and winners have emerged.

Recall that on his assumption of office as Vice-Chancellor of the University, Prof. Maduebibisi Ofo Iwe declared his interest to digitalize all processes in the University. The electronic voting system adopted in the just concluded SUG elections is another step in this direction, after the introduction of the e-senate and e-newsletter in his first 100 days in office.