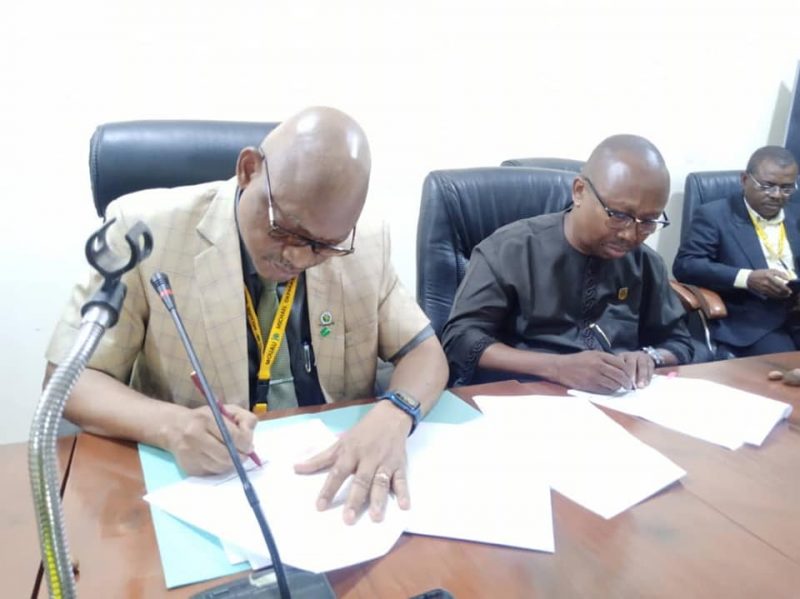 It was another historic day at the Michael Okpara University of Agriculture, Umudike as it signed a Memorandum of Understanding (MoU) with the Abia State Ministry of Environment for cooperation in the promotion of research, demonstration and capacity development for the conservation of natural resources.

Speaking during the signing ceremony held at the VC’s conference room on Thursday, the Vice-Chancellor, Prof. Maduebibisi Ofo Iwe commended the Abia State Ministry of Environment for opening its doors for meaningful partnership. He described the conservation of natural resources as an area that should not be ignored.

Responding, the Permanent Secretary of the Ministry of Environment, Iheanyichukwu Ubani who represented the Commissioner for Environment, Abia State, applauded the development strides of the Vice-Chancellor. He expressed optimism that the partnership with the University would contribute meaningfully to the country’s efforts toward protecting the environment.

Some specific areas of cooperation captured in the MoU include natural forest regeneration and afforestation; the establishment of medicinal plant species and standard Arboreta, as well as the establishment of conservation programs for rare African plants of various species within the biodiversity corridors.

The ceremony was attended by principal officers of the University including the Ag. Bursar, Chief Ugochukwu Ironkwe, and the University Librarian, Dr. Isaac Ogbonnaya. Internal council member, Mrs. U.K. Onuma attended as the representative of the Ag. Registrar, Mr. P.C. Nwaoma.

The Dean, College of Natural Resources and Environment Management, Prof. Anthony A. Nlewadim; former dean of the college, Prof. Emmanuel Nzegbule, and the