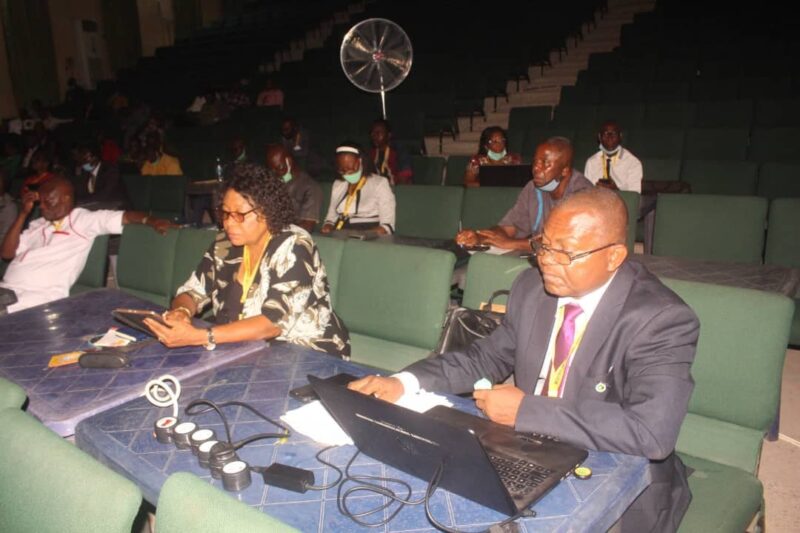 The 213th regular meeting of the Senate of the Michael Okpara University of Agriculture, Umudike (MOUAU), which held yesterday, was like no other in the University’s history as Information Communication Technologies (ICTs) featured prominently in the proceedings.

Speaking on the development, the Vice-Chancellor of the University, Prof. Maduebisisi Ofo Iwe, who reiterated that the application of ICTs had been one of the many initiatives he had in mind while coming into office in March. He stated that it would make for a high level of efficiency in senate meetings. According to an elated VC, “it makes meetings modern, especially in educational institutions. We are not supposed to carry paper about. Like today, nobody used hardcopy of anything, including the Chairman. We were all looking at uploaded materials. Nobody would say he or she does not have the material or that he or she forgot the materials at home which were common features in the past. Everybody had the same materials. So it makes for quality control on what is available for the meeting. So in that sense, it removes confusion as far as material availability is concerned”.

Speaking further, Prof. Madu Iwe stated that the initiative would save cost and enhance the visibility of the University, adding that it would be replicated in management meetings and other University statutory meetings like Postgraduate board meetings and Senate results meetings.

In his remarks, the Director of Senate Affairs of the University Dr. Moses Agbai, disclosed that the idea of a paperless Senate had always been his vision even before applying for the post of director, expressing delight that the VC also shared in his vision. Dr. Agbai, who also stated that the application of ICTs in senate sittings would save cost and man hour, adding that the initiative would place MOUAU among the top Federal Universities in the country. The director of Senate Affairs went on to commend the vice-chancellor for keeping to the promise he made on his inauguration day by making e-senate a reality in his first 100 days in office, adding that the VC even beat his deadline by making it possible in his 86th day in office.

Narrating his experience at the Senate meeting, a senate member and Professor of Organic/Medicinal Chemistry at the University, Johnbull Echeme, described the event as a mission made possible and a major breakthrough achieved by the administration of Prof. Madu Ofo Iwe. Prof. Echeme noted that deliberations and plans on how to make the senate go paperless, which had been ongoing in the past five years, had been stalled by a misconception that its implementation would be cumbersome, stating that the kick-starting of e-senate is an eye-opener that a lot of good things can be achieved in the University.

Speaking further, Prof. Echeme described his experience at the senate session yesterday as enjoyable, adding that senate members now have a sense of satisfaction knowing that they are measuring up with their counterparts in the developed countries of the world.