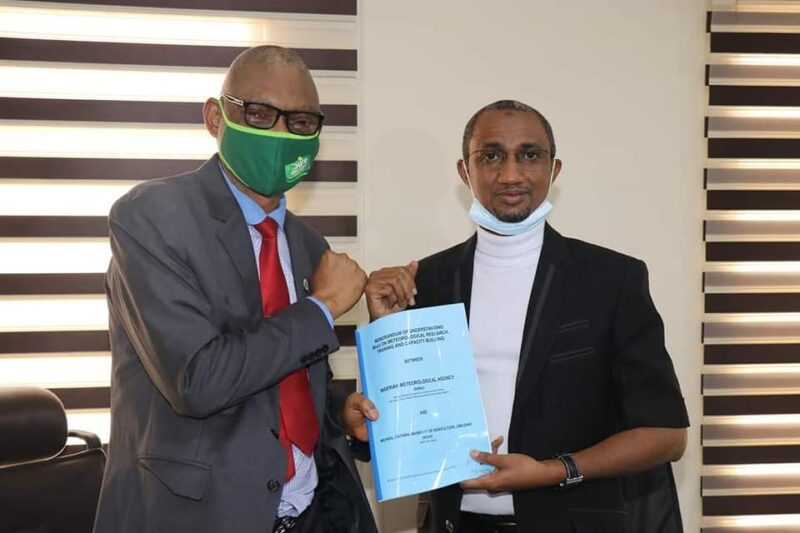 History was made this afternoon at the offices of the Nigerian Meteorological Agency (NiMet), in Abuja as a Memorandum of Understanding (MoU) was signed by NiMet and Michael Okpara University of Agriculture, Umudike (MOUAU).

The MoU which had hit a stone wall for two years marks a fulfilment of NiMet’s bid to increase the density of its meteorological stations across the country, and to fulfil the World Meteorological Organization’s (WMO) requirement for the establishment of weather stations.

NiMet in furtherance of the partnership had earlier built and equiped a weather station, promising to also equip the University’s meteorology laboratory with state of the art equipment all at no cost to the University.

Speaking at the signing ceremony, the Director- General/CEO of NiMet, Prof. Mansur Bako Matazu, stated that he was happy with the collaboration and expects that surplus scientific works and research would be born out of it.
He added that his organisation would not leave the University without support, stating that NiMet would send staff periodically to undertake training of the University’s staff.

The elated Vice-Chancellor of MOUAU, Prof. Maduebibisi Ofo Iwe, welcomed the development, noting that the weather station was very important and deserved priority attention within his first 100 days in office. Thanking NiMet profusely, he stated that the weather station is very important for agriculture, engineering, meteorogical studies, civil engineering and other courses.

The VC gave assurances that the donations would be used to train scientists in weather and meteorology studies, adding that it would be an immense boost to the University’s meteorology department.

The signing ceremony was attended by the Registrar of MOUAU, Mrs. Jacinta Ogwo-Agu, the University’s liaison officer, Mr. Rodney Egbodo as well as the NiMet’s Director of Administration & Supply, Hajia Rabi Mohammed and Engr. Mailadi Yusuf who is NiMet’s Director of Applied Met Services.

Several volumes of textbooks on meteorology and weather studies were also donated to the University.