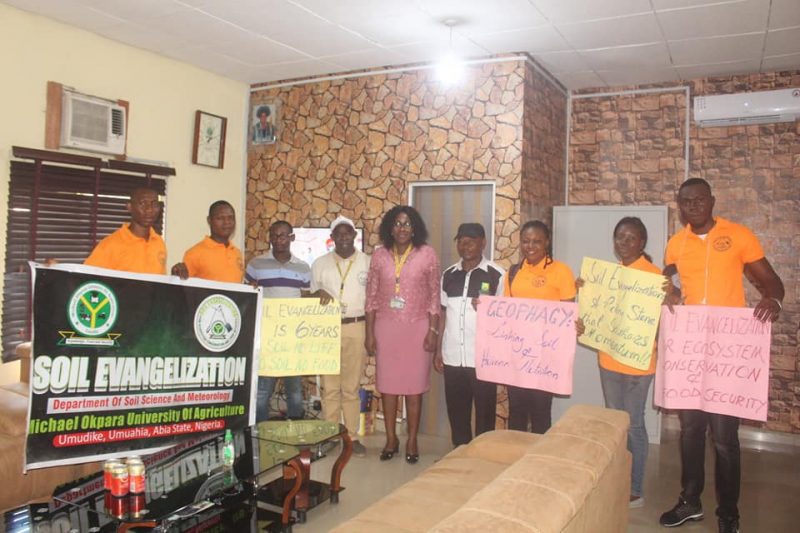 A group of staff and students from the Department of Soil Science and Meteorology, of the Michael Okpara University of Agriculture, Umudike, under the aegis of the Soil Evangelization Group, on Friday, held an awareness campaign, with the theme “Soil Evangelization for Eco-system Conservation and Food Security”.

The coordinator of the group, Dr. G.O. Chukwu, who spoke on behalf of other members in a visit to the Vice-Chancellor of the University, Prof. Maduebibisi Ofo Iwe, said the objective of the awareness campaign was to educate, enlighten, and inform the general public on the dangers of soil degradation, excessive use of fertilizers, and land misuse.

Speaking further, Dr. Chukwu, who disclosed that the Soil Evangelization Group was conceived in June 2015, as part of the Department’s contribution to the International Year of Soils, stated that good soil is a prerequisite in every planting season, to ensure a bountiful harvest. The Soil Scientist further stated that the group is the first of it’s kind globally.

In her response, the DVC (Administration), Prof. Elechi Asawalam, who represented the Vice-Chancellor, commended the group for embarking on the awareness campaign, adding that the VC, as a food scientist, is a lover of soil, who would not hesitate to invest in it’s improvement, to ensure eco-system conservation and food security.

Prof. Asawalam went on to describe soil as the most important factor in agricultural production, urging the group to induct more members, especially now that new students are being admitted into the institution. In her remarks, the DVC (Admin) further charged the group to create an opportunity where tree planting would be taught, so that the concerned students would benefit from the exercise.

Lending his voice during the visit, a student member of the group, Nwabueze Rowland Nwammuo stated that he was motivated to join the group by his quest for a better environment and his interest in advancing his academic career as a postgraduate student. According to the student, soil conservation should be every Nigerian’s responsibility, to bring a lasting end to the food challenges faced by the country.

The group expressed their profound gratitude to the Vice-Chancellor, Prof. Madu Iwe, for giving them the opportunity to celebrate 6 years of success in Soil Evangelization, assuring him that the awareness campaign will go beyond the shores of the University.

DISCLAIMER: This email (including any attachments) is intended for the addressee only, and the information that it contains may be confidential, legally privileged and protected by law. If you are not the intended recipient, please notify the author immediately and delete this email (including any attachments) immediately in its entirety. Do not disclose the contents to any other person or use it for any purpose or store or copy the information in any medium.