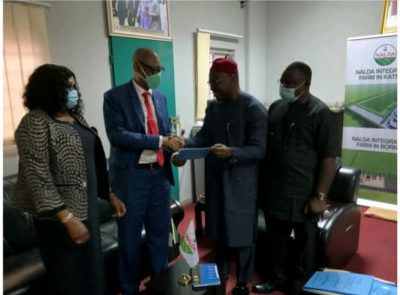 Following the promise of the Vice-Chancellor, Prof. Maduebibisi Ofo Iwe during his inauguration address, to greatly improve agricultural research and demonstration, which he reiterated at a press briefing to mark 100 days in office, a bright light has finally appeared at the end of the tunnel.

The Vice-Chancellor had expressed his ambition to clear and utilize at least 50 hectares of land for agricultural research and demonstration purposes. Initially, his dream appeared tall and incredibly difficult to achieve due to the paucity of funds and the capital-intensive nature of the project.

Not one to be daunted, Prof. Iwe embarked on a quest for partners and supporters. Today, his quest has been rewarded with the signing of a Memorandum of Understanding (MoU) between Michael Okpara University of Agriculture Umudike (MOUAU) and the National Agricultural Land Development Authority (NALDA), yesterday, Tuesday, 5th October 2021 at the Headquarters of NALDA in Abuja.

The MoU is for a partnership between NALDA and MOUAU for the development of hundreds of hectares of land for Agricultural Research and Demonstration.

This partnership further accelerates the desires of Nigeria to diversify the economy as well as to further enhance the vision of the Vice-chancellor to embark on serious agricultural practices by staff and students of the University.

Prince Paul Ikonne, the Executive Secretary of NALDA described the signing as a milestone achievement whilst expressing his confidence that it is a step in the right direction.
Speaking at the signing ceremony, Prof. Madu Iwe, brimming with joy, noted that hard work and persistence will always be rewarded with results. He thanked the NALDA leadership for the partnership, assuring them that the University will convert the opportunity into a resounding success for the country in the area of Agriculture.
Also present at the signing ceremony were the Registrar, Bursar, and the Director of Physical Planning of the University, as well as the Legal Adviser and the Principal Engineer of NALDA. Execution of the project will start almost immediately.